It’s usually the same story when a brand gets on Twitter in the hope of engaging with its audience. One usually sees a hashtag campaign shamelessly riding on a bunch of ‘influencers’ paid to tweet, or at best, a contest to win the next smartphone. 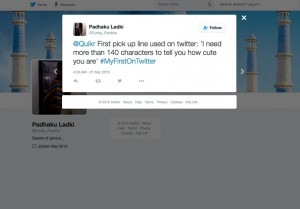 Finally, one brand gets the ‘Twitter Buzz’ right. With Twitter celebrating its 10th anniversary in the microblogging platform, Quikr celebrated it by making an emotional connection with the audience in order to drive more engagement and maximum participation. The idea to celebrate Twitter’s 10th birthday resonates well with users and everyone can join in the conversation.

March 21st marked the day the first ever tweet was sent out, i.e. 10 years ago. To commemorate the same and to bring to life the love that users have for this platform, the brand invited users to share one of their firsts on Twitter with #MyFirstOnTwitter.

Quikr is a free classifieds website meant to address regular needs of the local community. It is easy to use and helps you find, buy and post free ads for Cars, Real Estate, Furniture, Mobiles, Jobs, Services and lots more. We hope you have fun using Quikr.